Only users with ROLE_MANAGER permissions can perform these actions.

Lightrun allows Developers and DevOps Engineers to add real-time logs, metrics and traces to live applications on demand. This means, in practice, that information that was once only accessible by pushing new code with more instrumentation or by profiling your application, can now be added on demand - right from the IDE.

In this post we’ll share how to integrate Dynatrace and Lightrun in order to allow two complementing ways of understanding your application:

To get started with Dynatrace, sign up for a Dynatrace SaaS trial here.

We’ll need two different components from Dynatrace in order to get started: One Dynatrace ActiveGate and one (or more) Dynatrace OneAgents.

Lightrun Metrics - which are added during runtime - need to be pushed into Dynatrace for us to visualize them in a dashboard.

When these metrics are piped from the IDE Plugin to the Lightrun Management Server, they can be exported out into a remote StatsD daemon. Since Dynatrace supports StatsD, we could pipe the Metrics from StatsD into Dynatrace - and to do so, an Environment ActiveGate must be configured and installed with the StatsD module enabled.

Before we dive into the configuration, let’s take a look at the eventual topology of the Lightrun Metrics ingestion:

Now that we’ve got the topology down, let’s start the configuration process:

Where should I run this?

For the purposes of this tutorial, it is sufficient to run an ActiveGate on any machine that has a publicly accessible IP address, and on which you can open a dedicated port (whichever port that may be). If you don’t have a dedicated machine for this purpose, you can use your own local machine using a tool like ngrok and its multiple tunnel feature. See this great StackOverflow answer for a good reference on the needed configuration steps.

The 8125 port selection is due to StatsD default port being 8125 - it can be changed to any port you’d like.

Your ActiveGate should now be properly installed and configured.

For the purposes of this tutorial, it is sufficient to run a single OneAgent on the machine that runs your applications. We will use a simple Java application running on a VM, but any machine that can run a Dynatrace OneAgent will suffice.

Lightrun is an IDE-based, real-time troubleshooting tool for live applications. That means, in practice, that you can ask your applications code-level questions and get on-demand answers, right in your IDE. In addition, information collected by Lightrun Actions (including Logs and Metrics) can be exported into Dynatrace for easy consumption and visualisation.

Lightrun works by adding an agent to your live applications. That agent (which we will install below) allows for real-time instrumentation - and exporting - of Lightrun Actions.

Lightrun’s agent can coexist with Dynatrace’s agents without any issues, as both types of agents rely on different capabilities of the underlying system: Dynatrace’s agent works on the operating system level - it is a separate binary - while Lightrun’s agent works on the runtime level (the JVM, V8 etc…) and usually delivered as a runtime agent or language-level package.

In order to add Lightrun Actions to a Live Application, you need to install one of our IDE plugins (which we will also install below) and spring up a Lightrun Agent with your application.

This example details how to install Lightrun with the Java agent and the IntelliJ plugin, but similar instructions apply to our Node.js and Python agents as well.

Now that you’ve got the IDE plugin installed and configured, we can spin up our application with the Lightrun agent.

Before that, though, make sure you have an application ready to work with - the one we’ll add the Lightrun Logs & Metrics to. For the purposes of demonstration in this tutorial, we will use the following sample app. Once you’ve downloaded it to a folder on your computer, follow these steps to install the agent:

You might have noted that we compiled our application with debug symbols - the -g flag is used for generating debugging information during compilation. While this is done automatically by most IDEs nowadays, it is required for Lightrun to operate well. If you're setting up for using Lightrun in production, make sure your build server or CI agents are set to compile Java with debug information.

Now that your application is up with the agent, we’d need to do one more step on the Lightrun side - configuring Lightrun’s StatsD integration.

In order to pipe Lightrun metrics to Dynatrace, we would need to use a tool called StatsD. We’ve installed StatsD in a previous part of the tutorial as part of the Dynatrace ActiveGate installation, and now need to configure Lightrun to work with the StatsD daemon.

To do so, we’ll enable the StatsD integration from the Lightrun Management Console:

Lightrun’s StatsD integration is now active, and will pipe all Lightrun Metrics your users create into the Dynatrace ActiveGate instance.

This demonstration will use a simple Java application, but Dynatrace supports a wide variety of technologies.

The demo application, if you haven’t downloaded it already, is available from here. The application includes a prime number counter that runs through all the numbers in a given range, and outputs - at the end of execution - the amount of primes it found. In addition, throughout the application’s run, it emits a log line every 1000 numbers counted that mentions how many primes were found so far.

We’ve compiled and ran the application in previous stages, so now all that’s left is to add Lightrun Actions and see them in Dynatrace!

Dynatrace auto-instruments a large amount of information for you once you set up your application with it. Specifically, Dynatrace knows how to collect logs from your host system, given that those logs are placed in a folder that’s already collecting system logs. 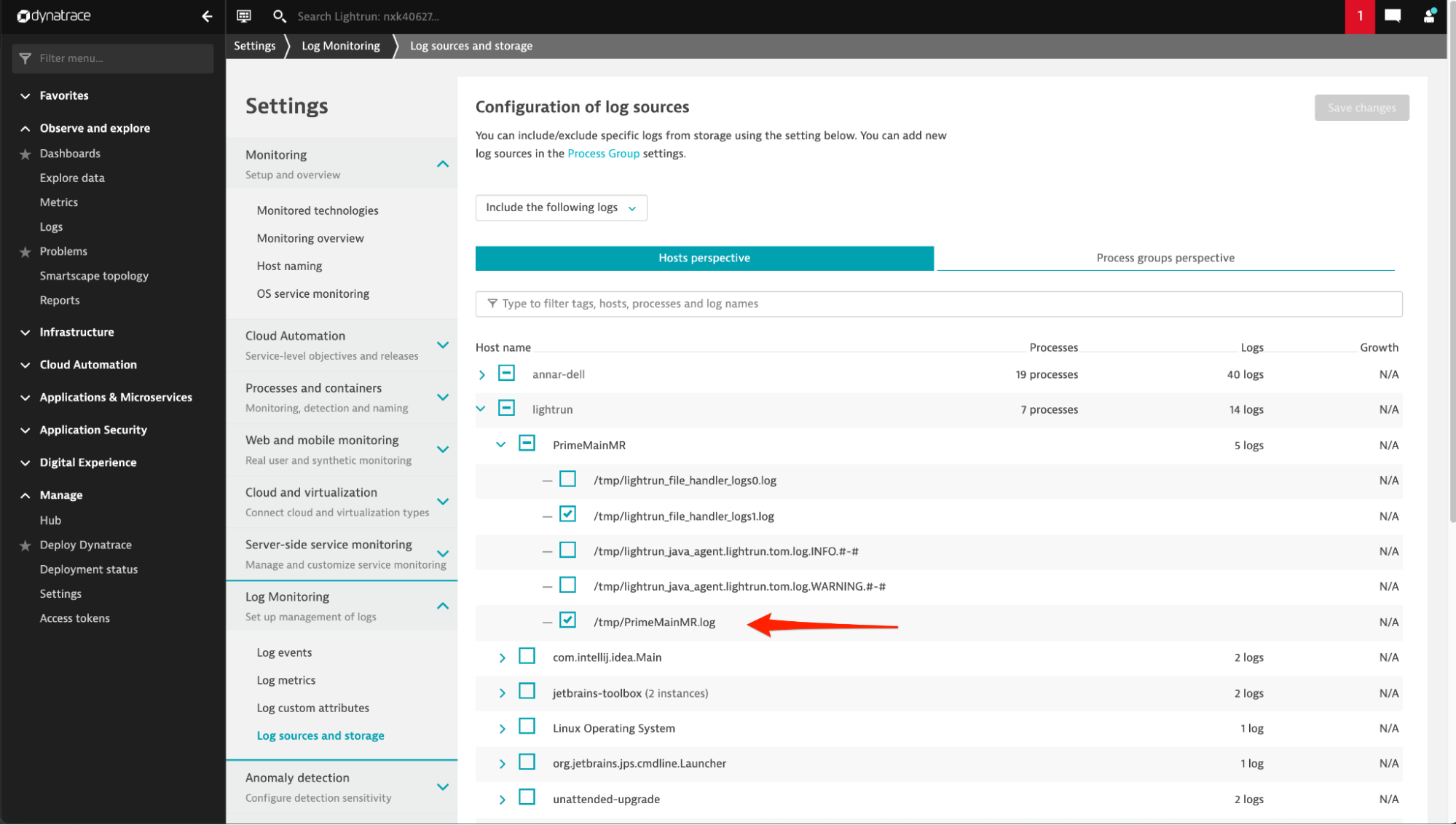 While you’re there, we can also choose to collect the Lightrun Log file, which contains all emitted Lightrun Logs and Metrics:

Now go into Dynatrace Log monitoring, and then filter on the left hand side for /tmp/PrimeMainMR.log. This will show you all the static application logs, those that were added by developers when they originally developed the application: 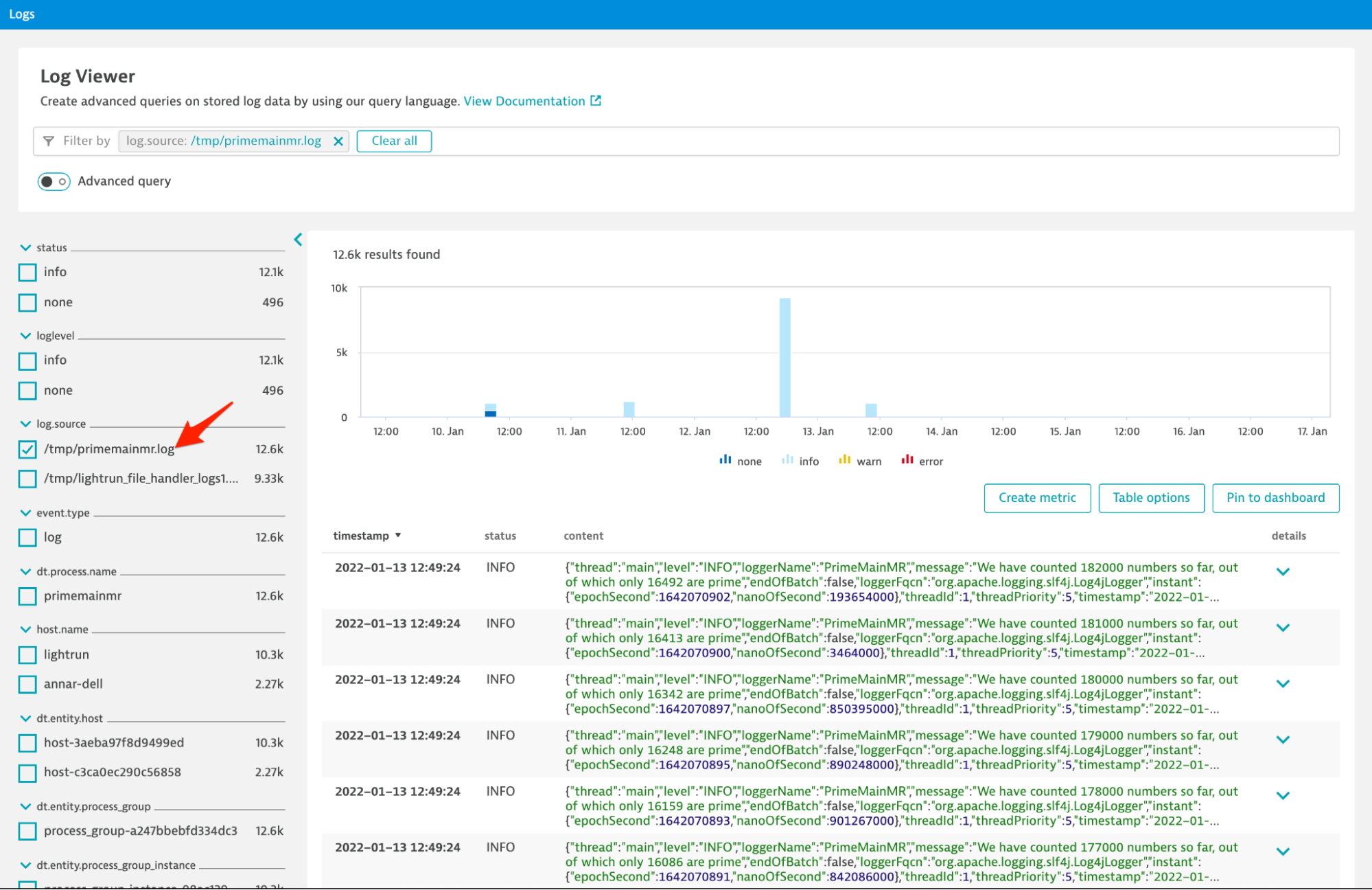 It’s now time to add some Lightrun Logs too - go back into the IDE, right-click next to line 87 and click on Lightrun -> Log: 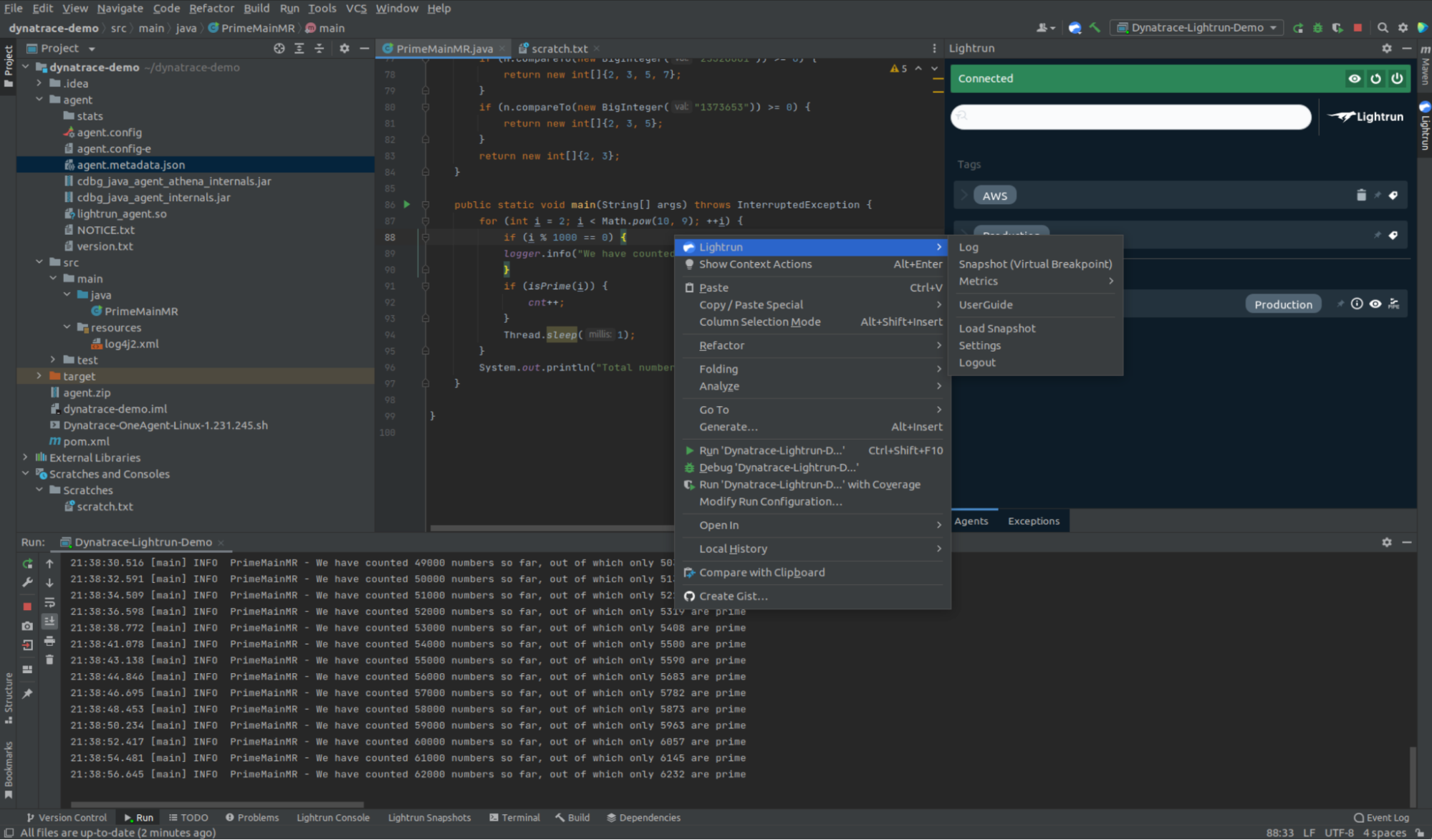 When the “Create a Log” screen shows up, enter the following information: 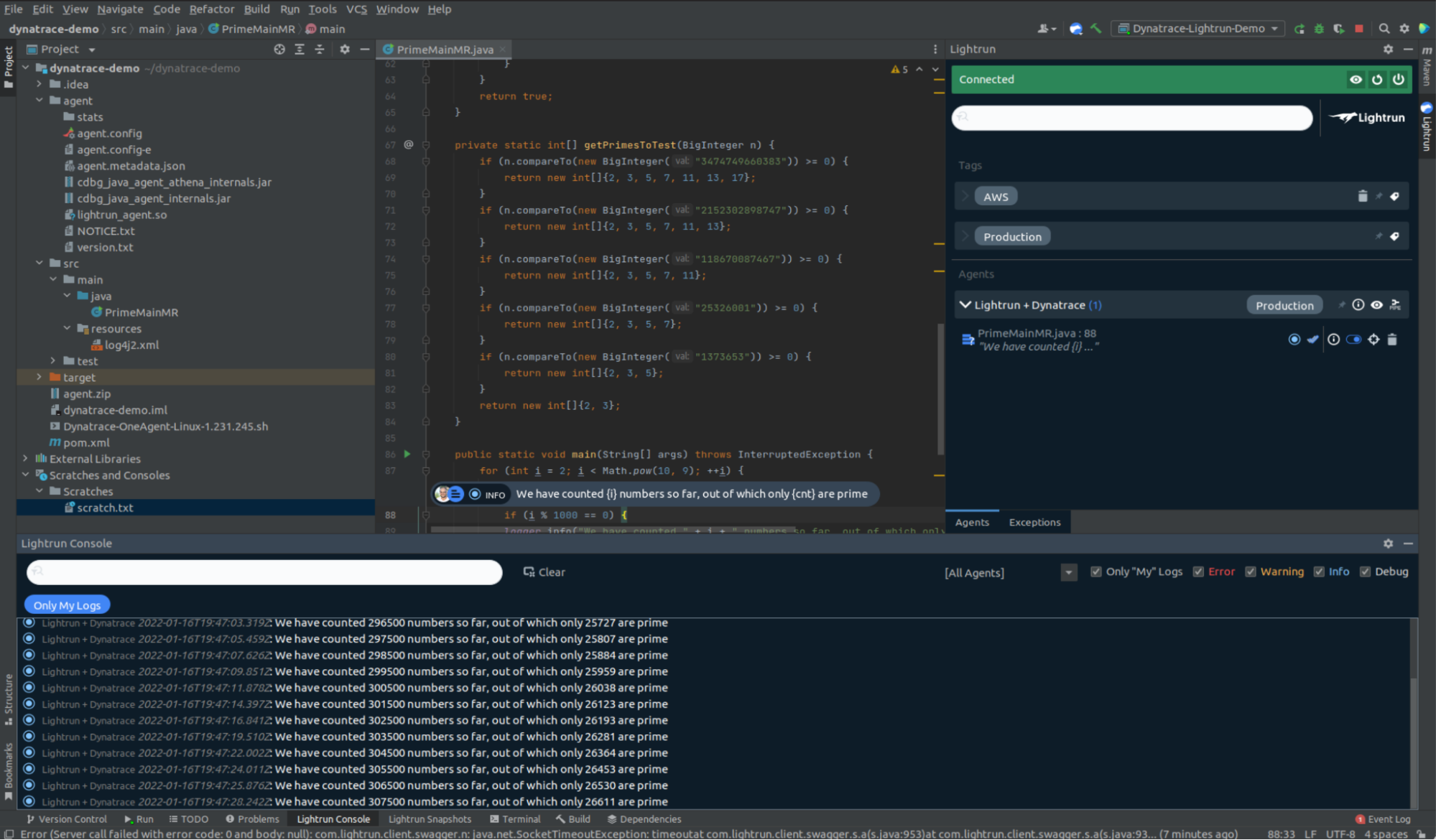 Going back to Dynatrace, you would also be able to view the Lightrun Logs! Just go into “Logs” from the Dynatrace Sidebar and check the correct file name: 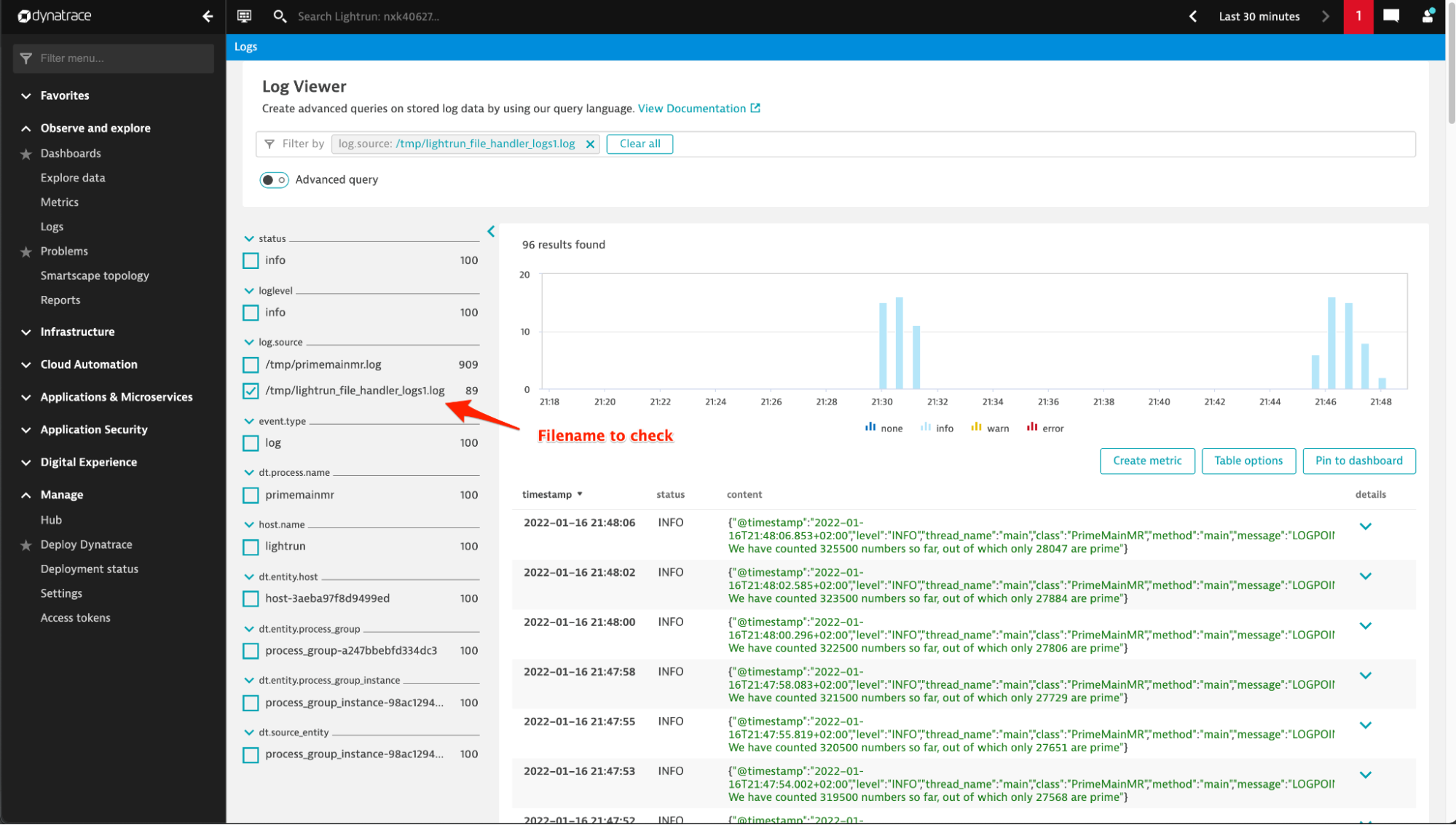 In addition to logs, Dynatrace also collects a wide array of metrics from your running hosts and applications. Go to “Metrics” on the Dynatrace sidebar to explore all the possible metrics - in the filtered view below, for example, we can see all the JVM-related metrics that Dynatrace automatically collects from running applications:

Lightrun also offers a wide array of metrics you can choose to instrument in real-time: 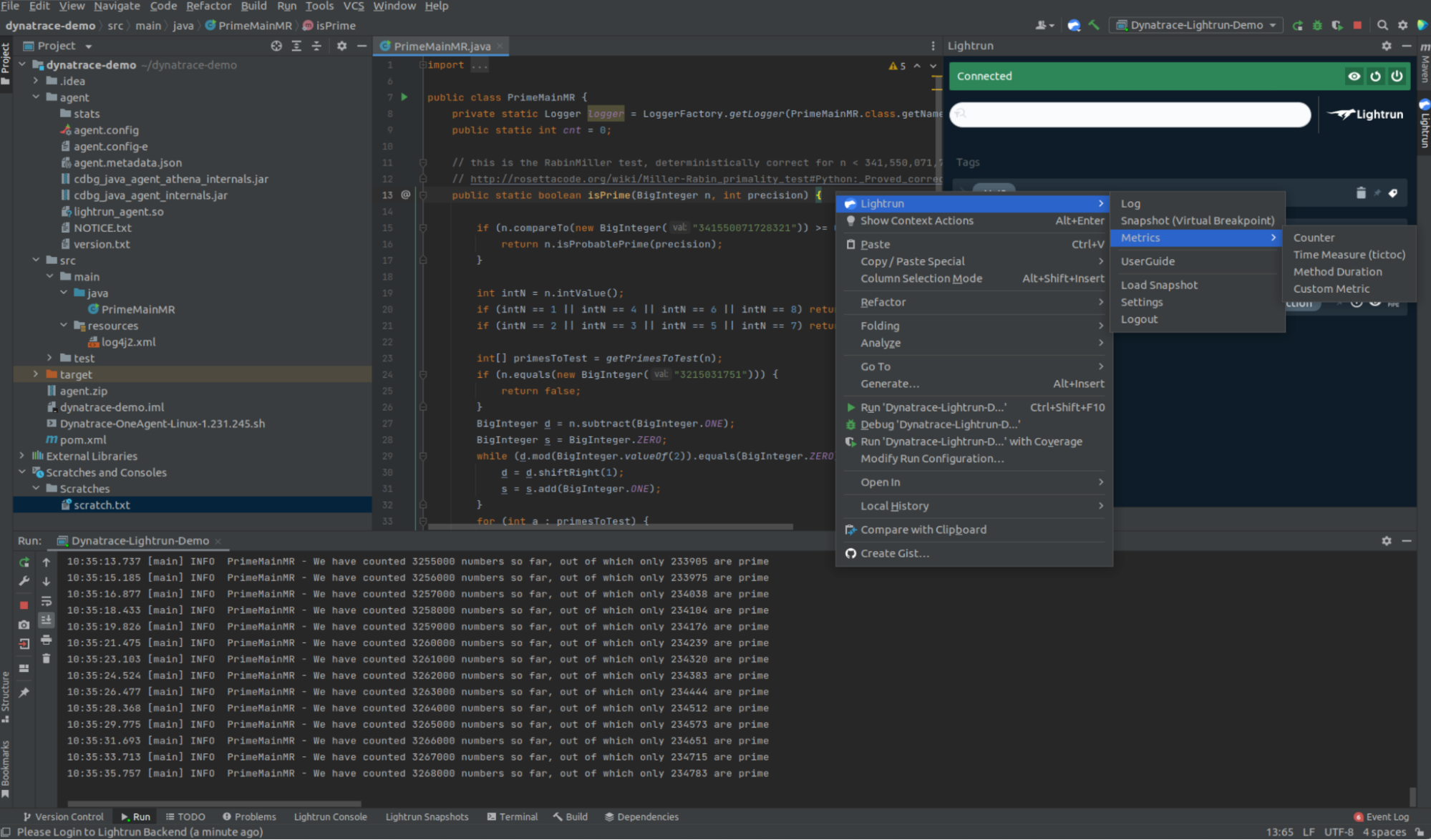 In the “Create Method Duration” window that opens, let’s give the Metric a descriptive name - in our case IsPrimeMethodDuration - which we will use to later find it in Dynatrace: 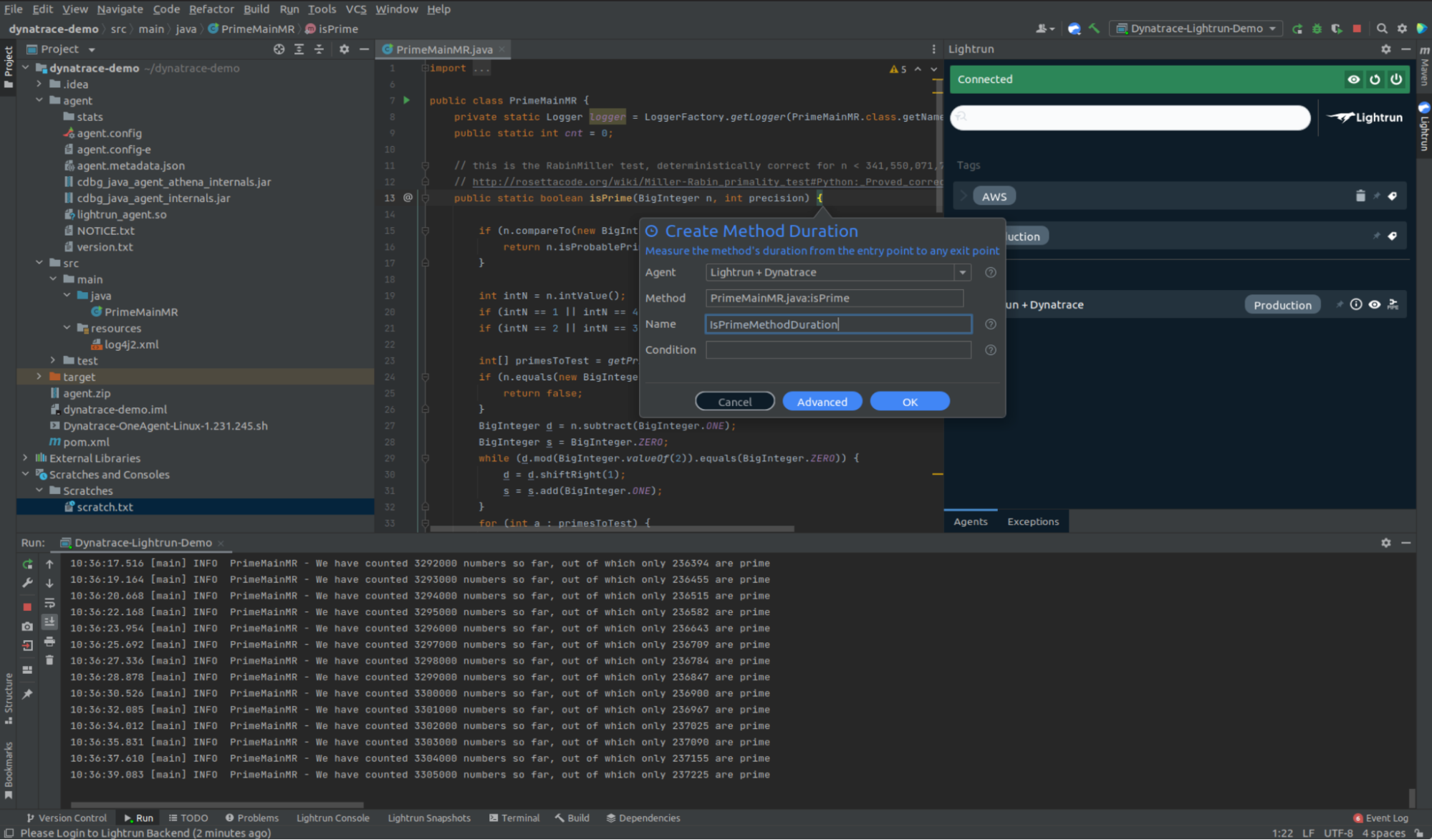 If we go to the Lightrun Console and filter for IsPrimeMethodDuration, then we will be able to see the emitted Metrics in real-time: 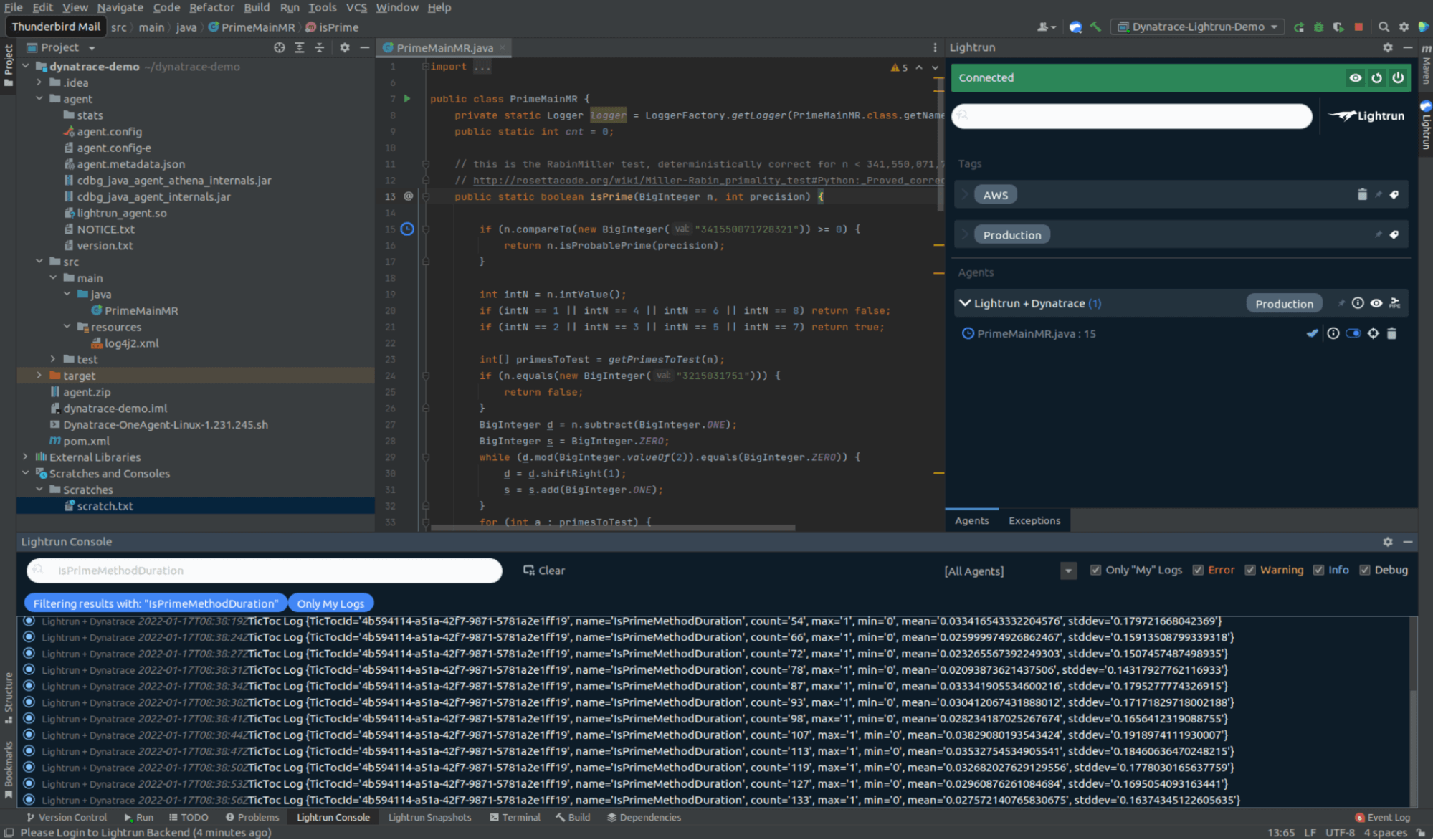 Metrics are continuously emitted every roughly 3 seconds regardless of whether the method was invoked or not. This allows us to create smooth, continuous graphs without relying on the method to actually be invoked in every window of time.

Since we set up the ActiveGate, StatsD and Lightrun integration already, if we go to “Metrics” in the Dynatrace sidebar we should be able to immediately see the Lightrun Metrics appear: 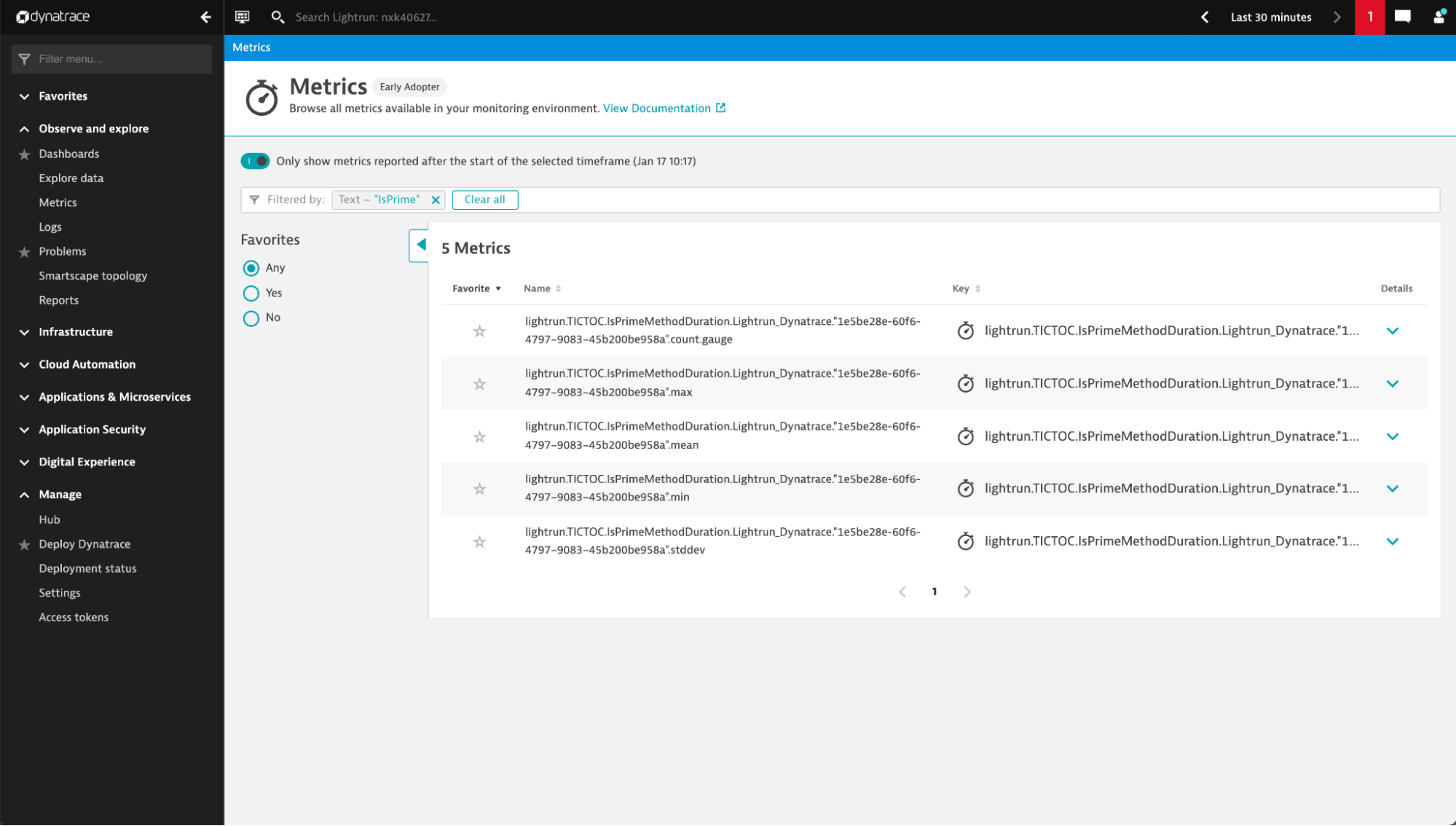 Clicking on the “Details” arrow next to any of the metrics will show you a graph of that metric: 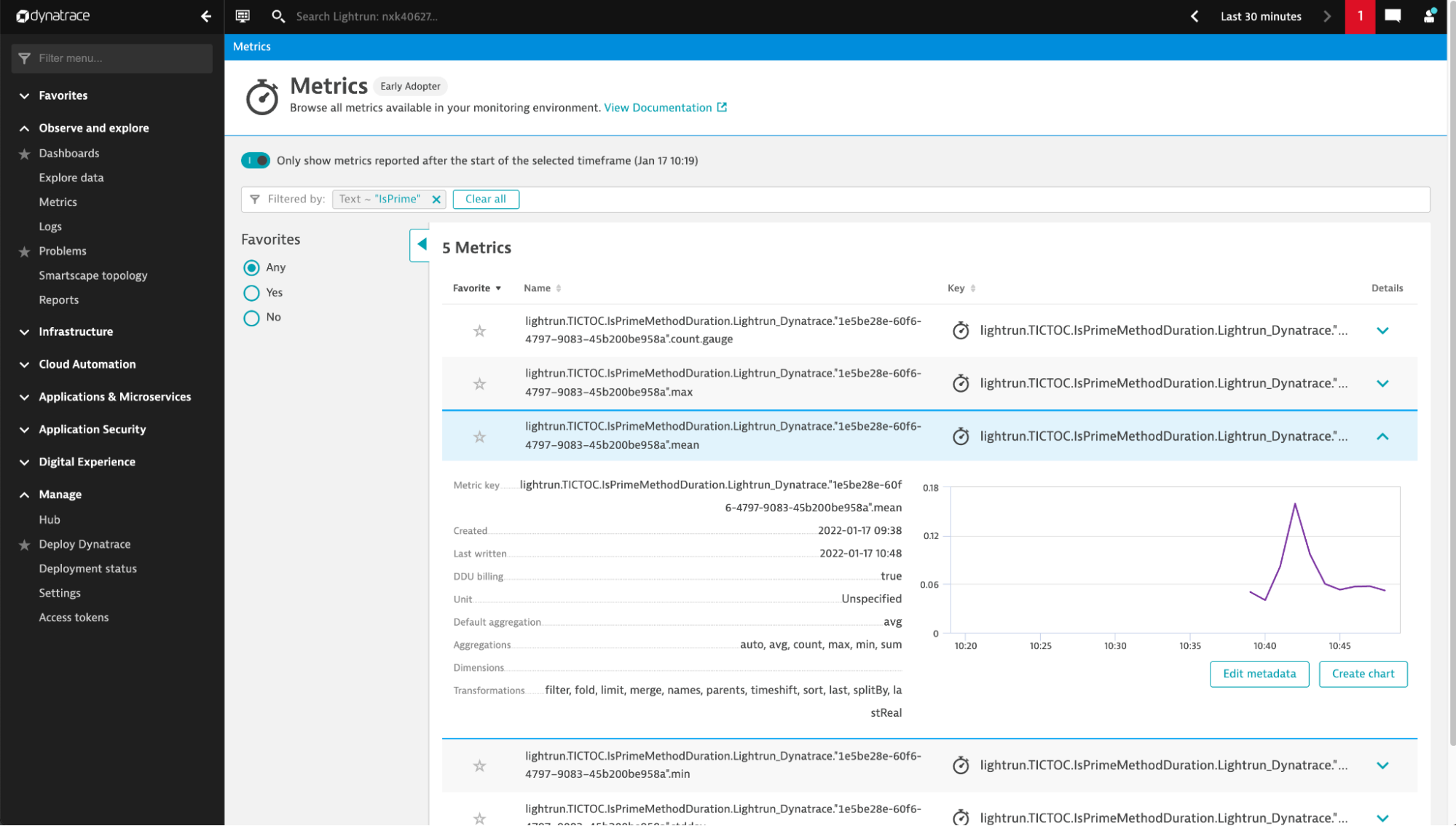 However, this is not very comfortable for ongoing metric visualization. Fortunately, now that the Lightrun Metrics are available within Dynatrace, we can add them to a Dynatrace Dashboard.

In the Dynatrace sidebar, click “Dashboards” and then “Create a Dashboard” in the window that opens. In the view below you can see we have already created one Dashboard called “Lightrun Metrics”: 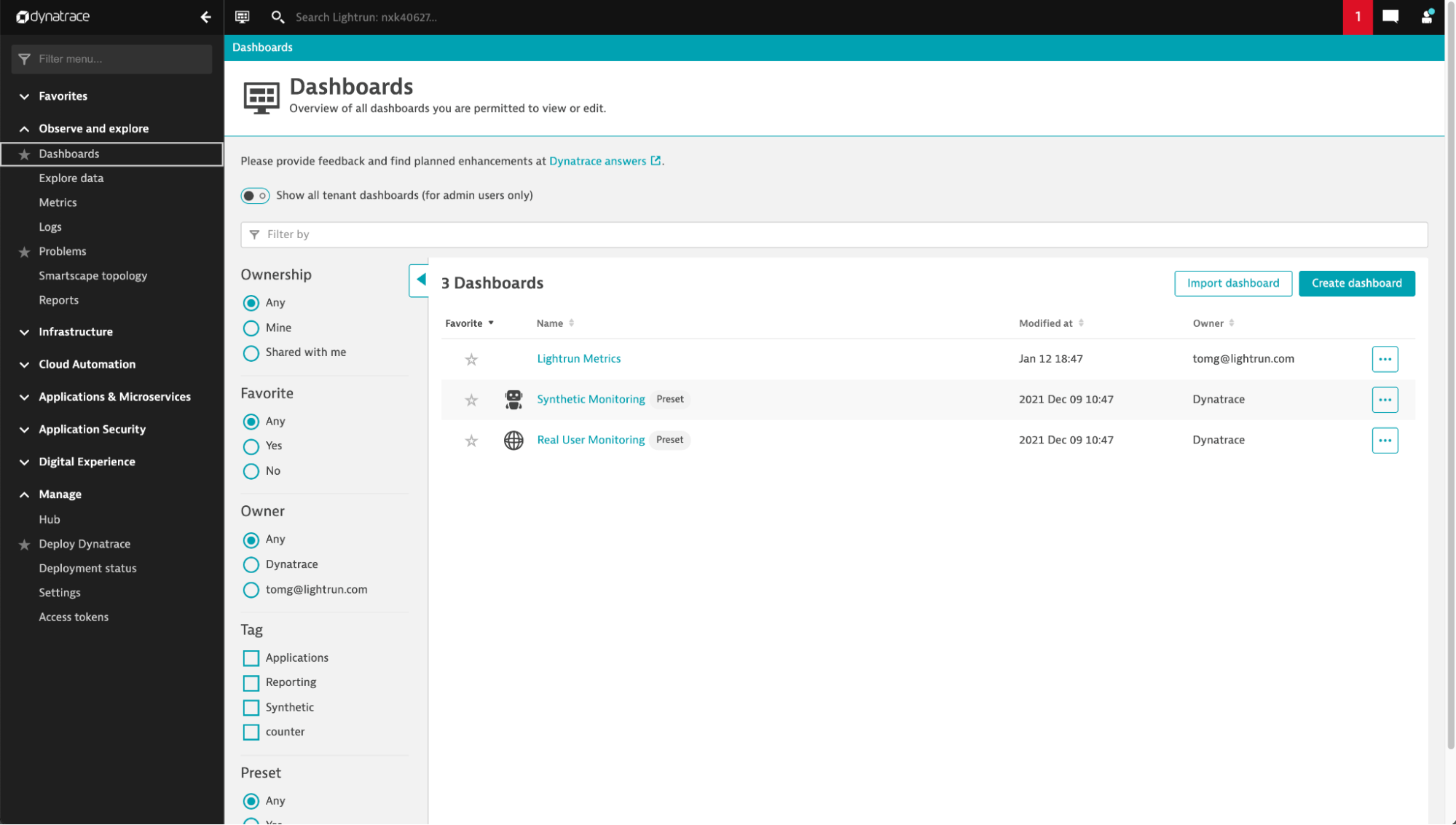 In the window that opens, click “Edit” and then drag a graph tile into the dashboard and position it wherever you’d like. We named our tile “IsPrimeMethodDuration Graph”: 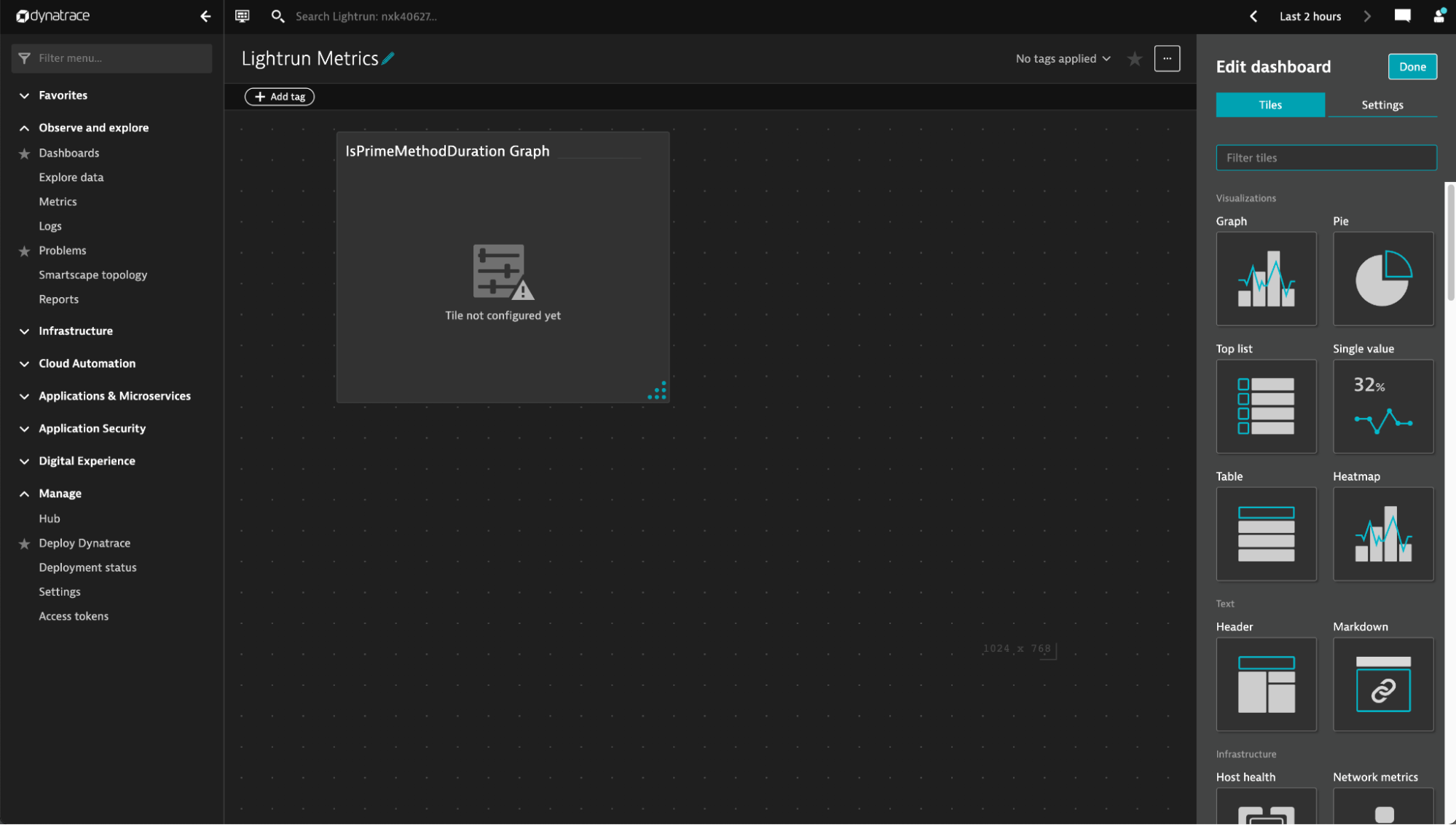 We now need to attach the correct metric to it. Click the tile and then click “Configure Tile”: 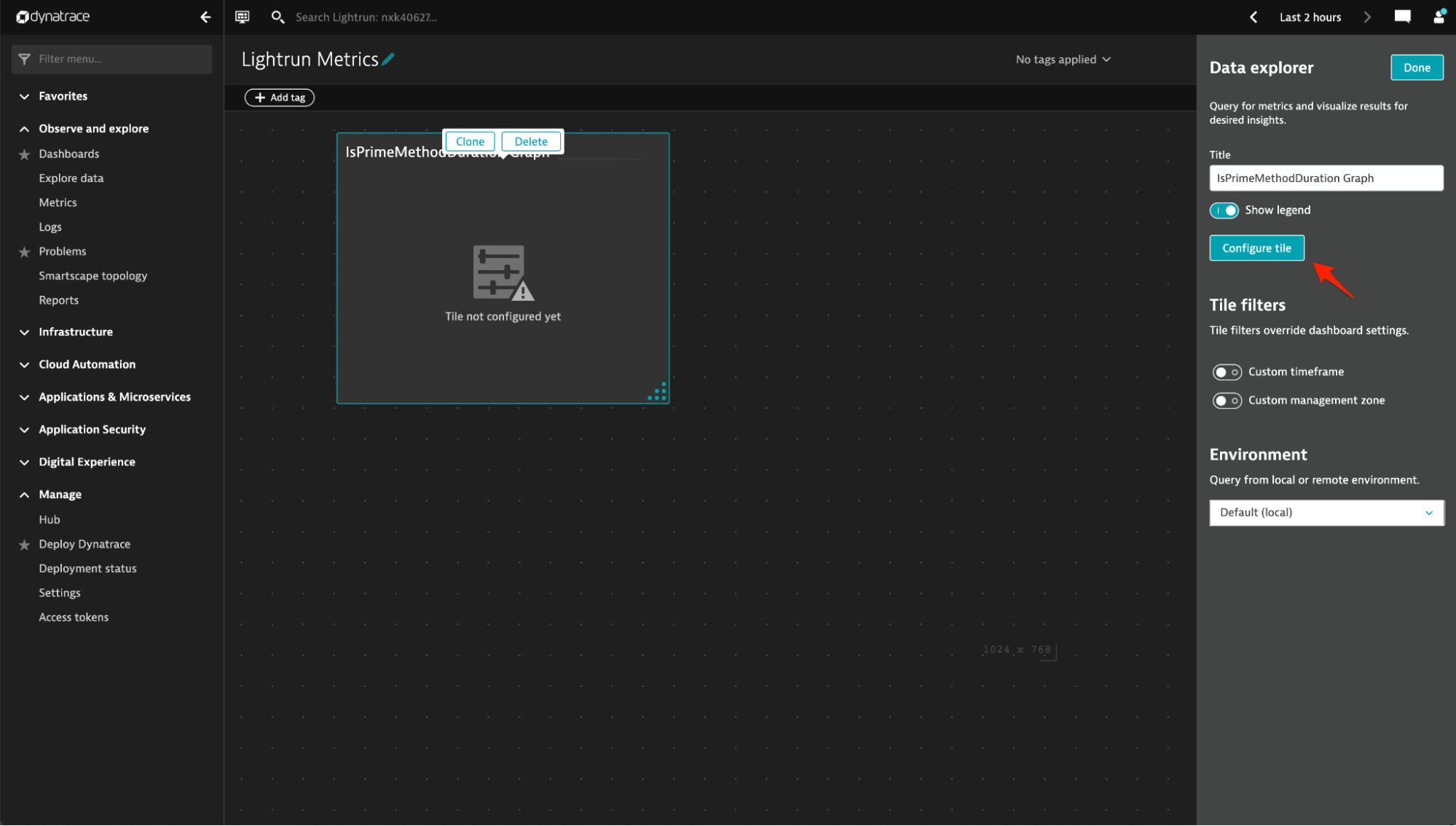 In the Data Explorer window that opens, search for IsPrimeMethodDuration.mean, since this is the Metric we’d like to instrument: 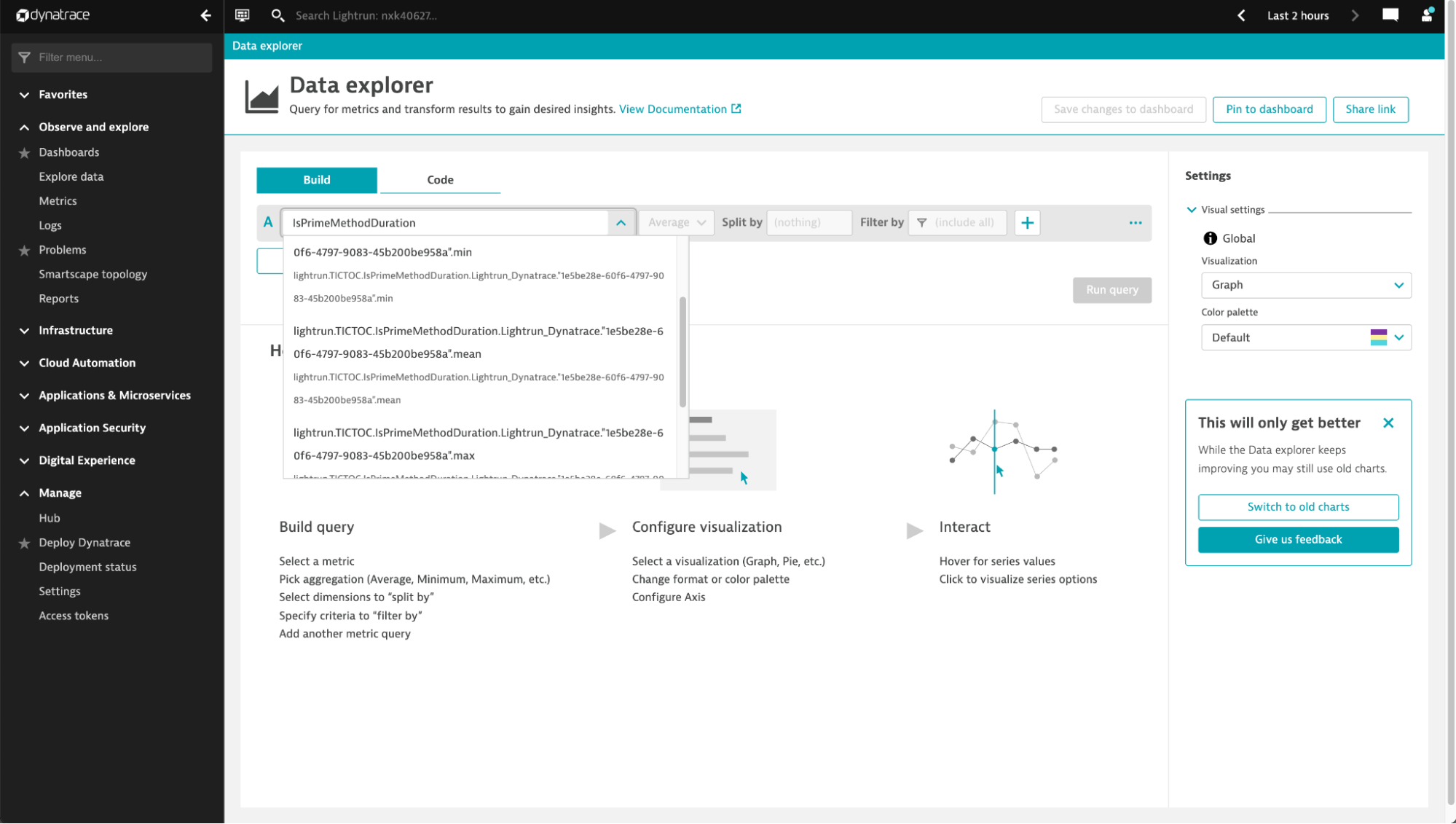 Click “Run Query” to get a graph of the metric: 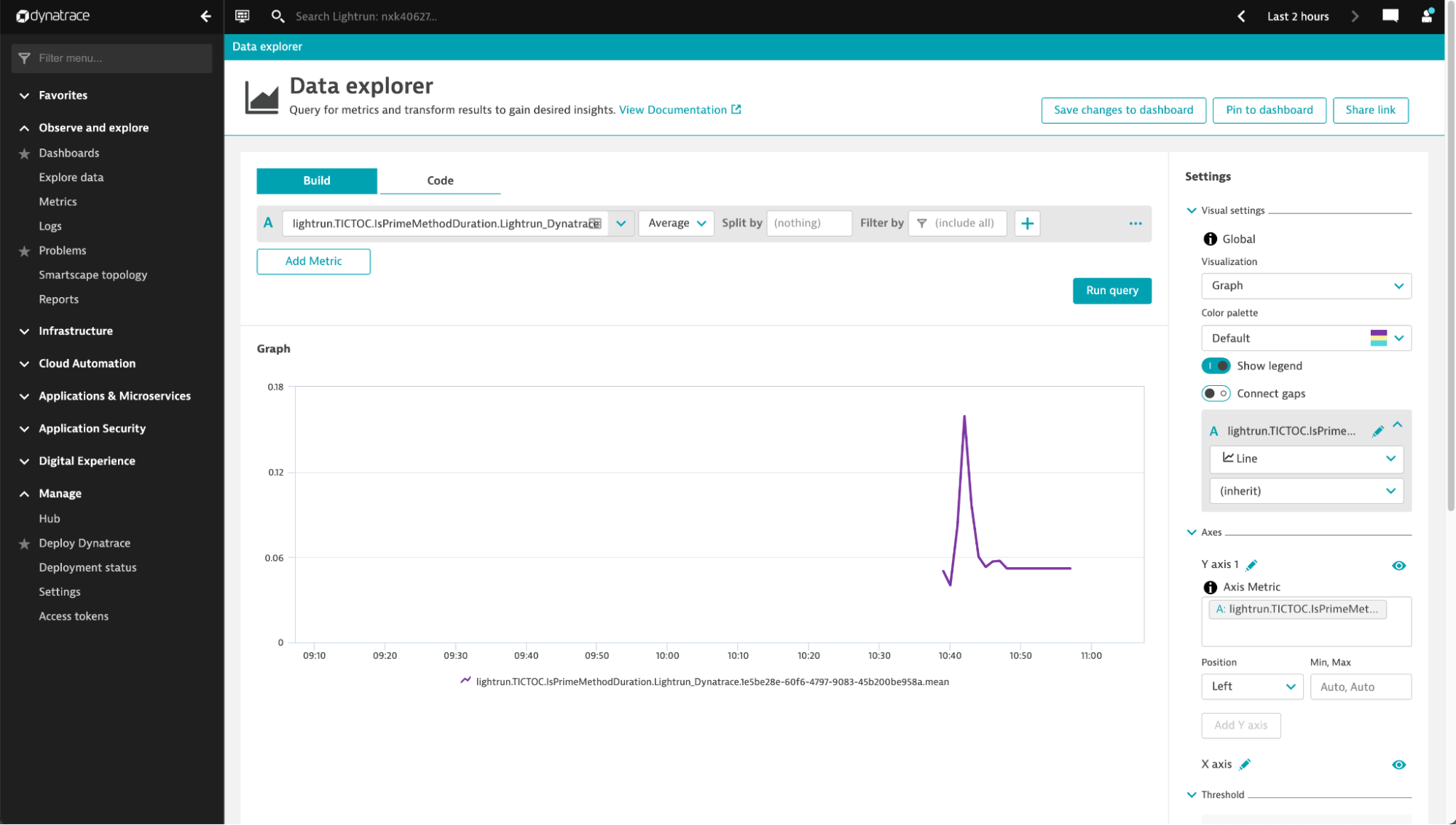 Click “Save Changes to Dashboard” and wait for the dashboard to load - our Metric should now appear on the dashboard! 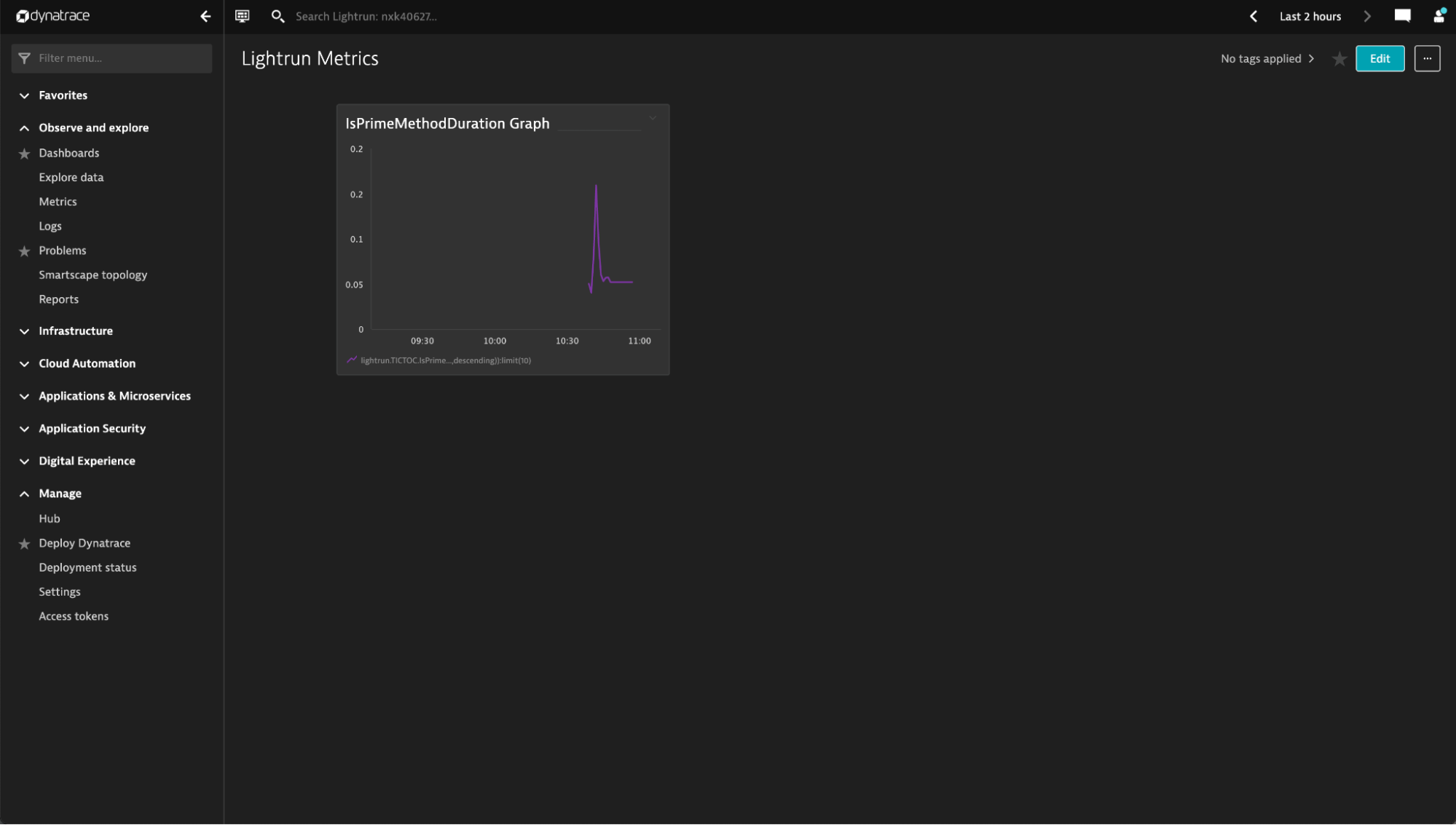 We’ve now seen how to integrate Lightrun Logs and Metrics into Dynatrace Log Monitoring and Dynatrace Dashboards. This integration enables full-cycle observability - the ability to surface issues using Dynatrace, inspect them using Dynatrace itself and add real-time, on-demand, code-level Lightrun Actions that are piped into Dynatrace without ever stopping the application.

If you have any ideas for other integrations or in need of assistance, reach out to us directly and we’ll be happy to talk to you.

If you’re not seeing Logs or Metrics in Dynatrace or in the Lightrun Console, make sure to pipe the Lightrun Actions - click on the the “pipe” symbol next to the running application, then click on “Both”:

Dynatrace automatically filters displayed information according to a specified time range. If you’re not seeing the relevant Logs or Metrics it might be due to a wrong filter. Click the time range button at the top right of the screen and ensure

it is configured correctly: 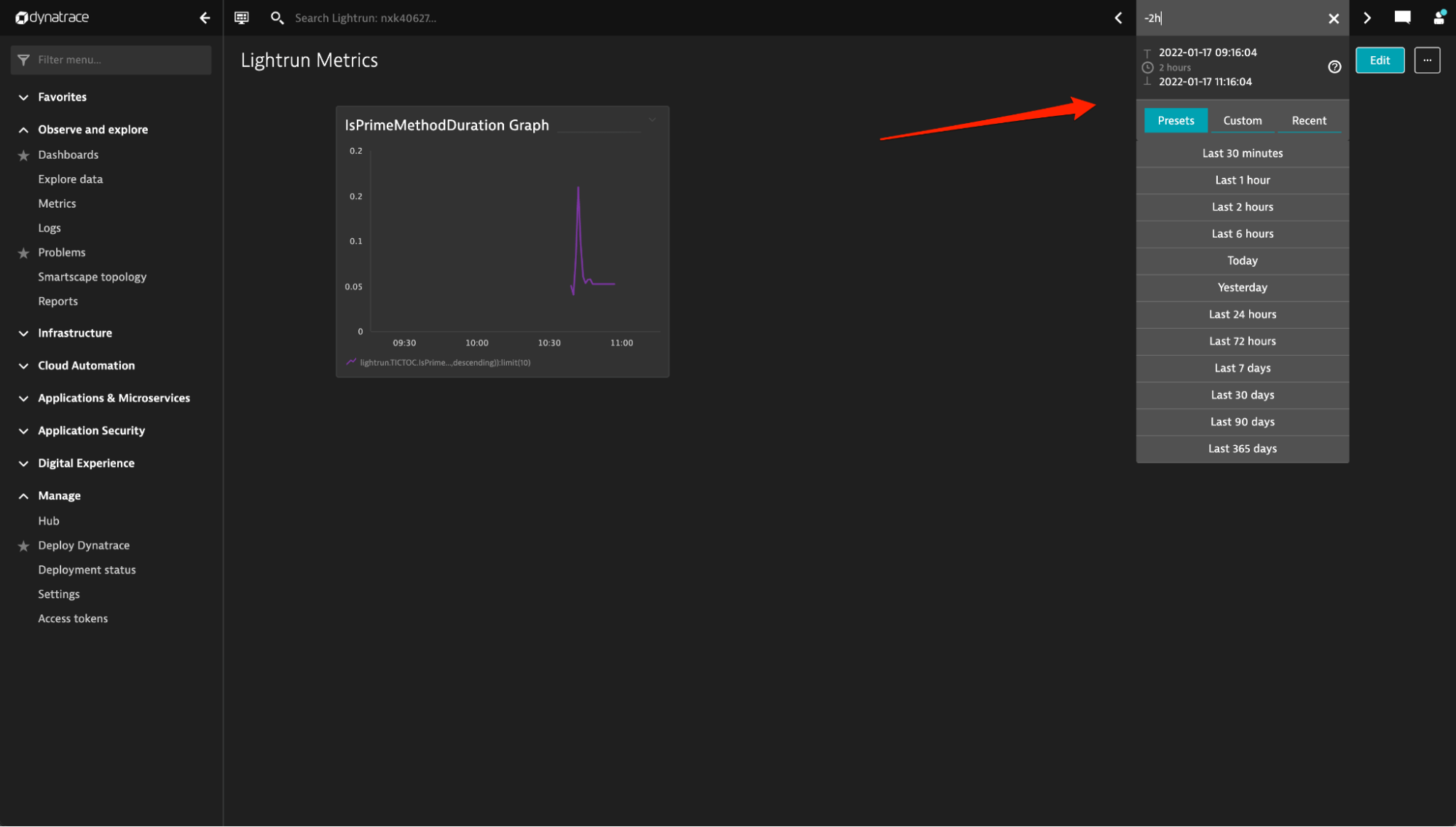